We had such a blast with Shay Mitchell at our West 3rd St shop yesterday. What an all-around awesome person! How fun is this instagram video she made?

I wear my sunglasses at night… ! Having wayyyy too much fun at my good friend Dan Deutsch's optical store! Check it out for some awesome glasses! @dandeutschoo ??? 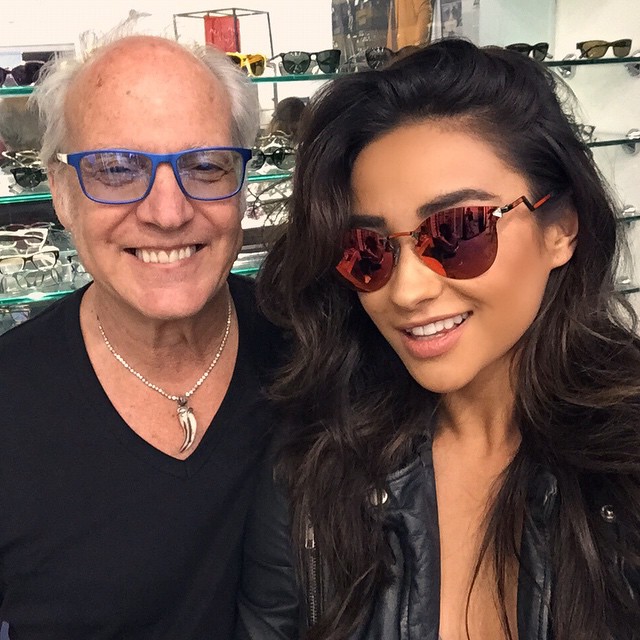 Shay, thanks for the visit and the insta-love. You rock! 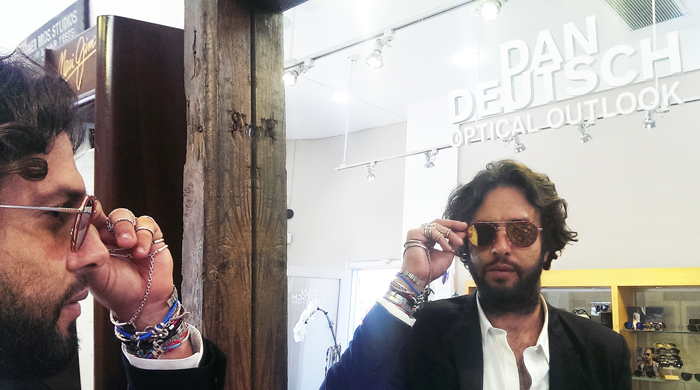 Neighbor, tastemaker, jewelry designer, and friend M. Cohen in our 3rd street shop accessorizing his personal stack of amazing M. Cohen bracelets with a pair of red, flat Thom Browne aviators. Check out his his gorgeous collections online or, even better, in person at his boutique on 3rd.

Eyewear is jewelry to the face

We are trying to stay cool about these killer Thom Browne specs, but we’re having a hard time. They are just so good.

Browne professes not to know too much about the history of fashion, but a quick study of his eyewear says otherwise. The new TB-707, part of the Thom Browne Summer 2014 release, is the latest in a series of glasses that reference the browline tradition. We think Browne and his team hit it out of the park with this one. It’s an incredibly tight design.

Let’s start with the shape. The contours of the lens have been softened and proportions reigned in from his previous clubmaster-style frames. Browne’s suits for men are known, among other things, for their extreme (short) tailoring. And while other Tom Browne Eyewear have taken more liberties with proportion, the dimensions for the 707 can be described as more commercial. It just looks good on. The bevels and curves of the browline are smartly tailored. And always, each screw and rivet is custom made and carefully designed and crafted.

The 707 comes in three colors: black, grey and tortoise. Let’s talk about the black and gold combination: anything but boring. The front of the frame is matte black acetate. For Thom Browne Eyewear, whatever glitters actually is gold, and in this case the titanium core of the frame is clothed in 12 karats.  And then we come to the accent colors.

Building on the red, white and blue silk lining that Browne uses for the interiors of jackets and purses, the TB-707 features a series of red, white and blue laminates on the interior of the frame, which tie in with Browne’s signature, similarly-colored temple tips.  It’s a detail to be enjoyed by the person wearing the glasses more than for anyone else — a personal luxury, which is what’s it’s all about, right? 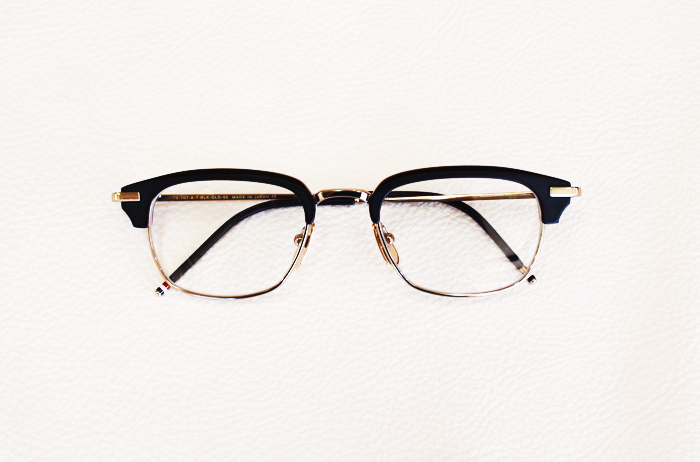 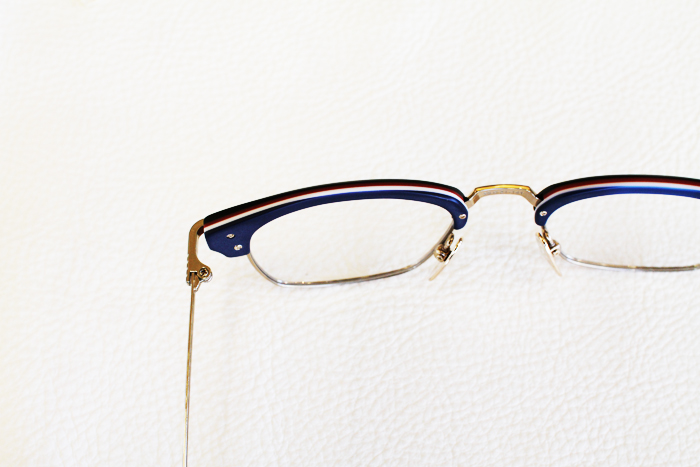 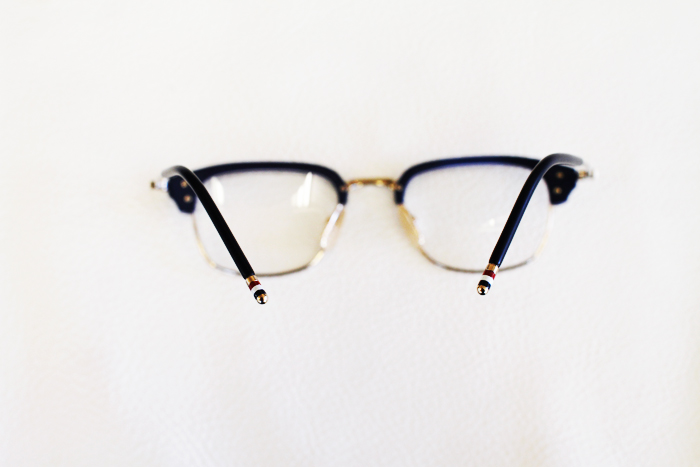 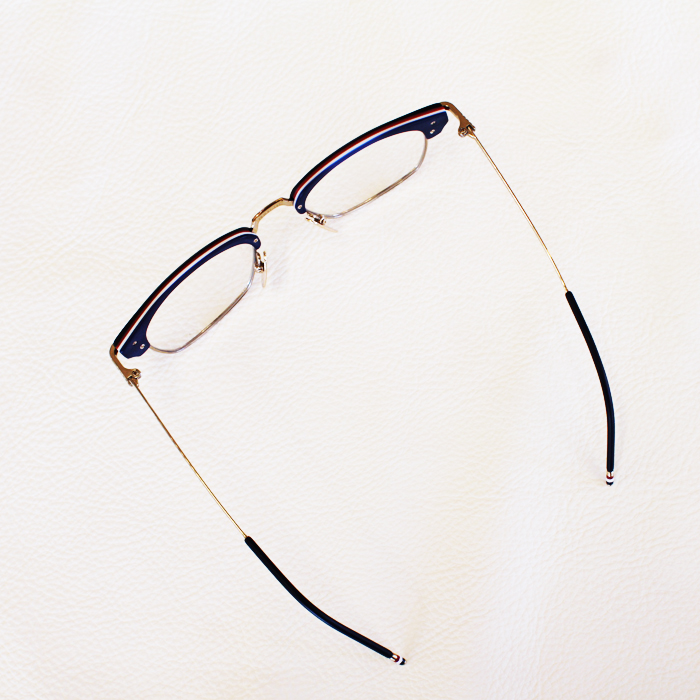 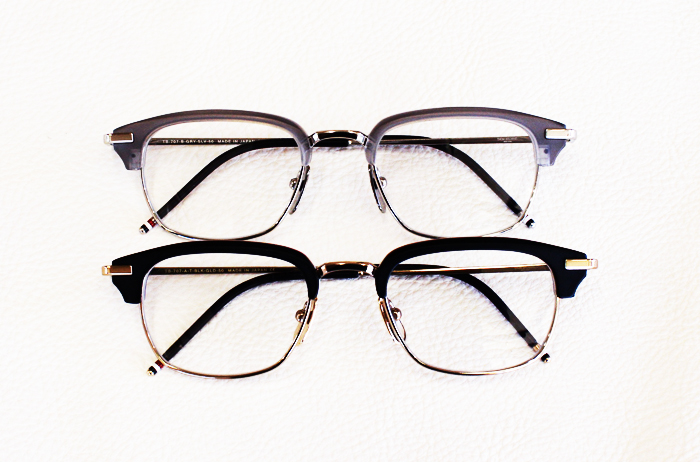 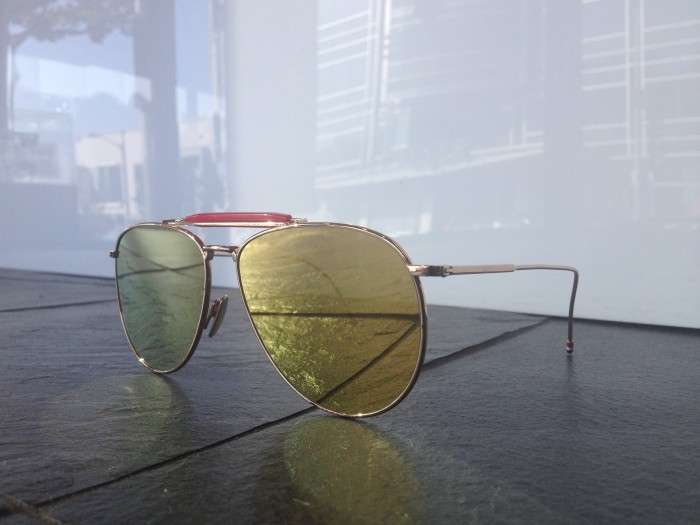 How does a designer continue to innovate while staying true to their identity? It’s a tricky balancing act and we think Thom Browne is doing a bang-up job of it.  The brand’s clean lines, carefully wrought details and new approaches to the classics have spawned some new love children, and we are excited to have the latest results in shop.

The latest issue include this sunglass gem. It’s based on the classic aviator, but as always, Browne has created something new. With its acetate lens inserts, flat base-curve lenses, flash gold mirrors, titanium construction, signature red white and gold temple tips and as expected perfect mix of exquisite details and lack thereof. 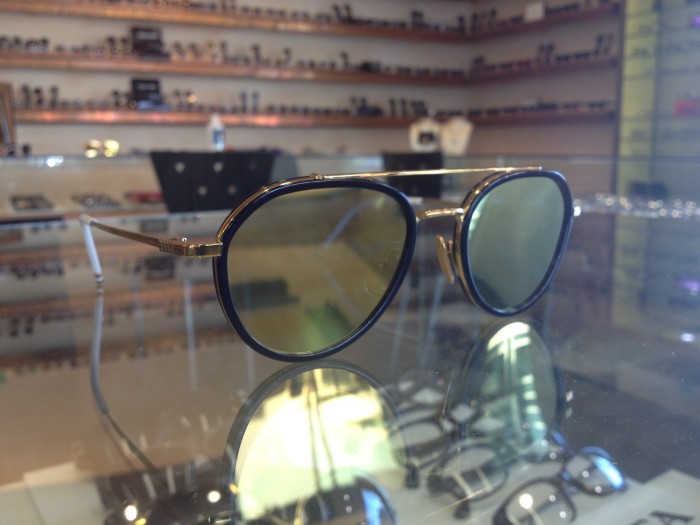 Luckily Browne designed a companion frame in square, shown here side by side with its more traditional counterpart: 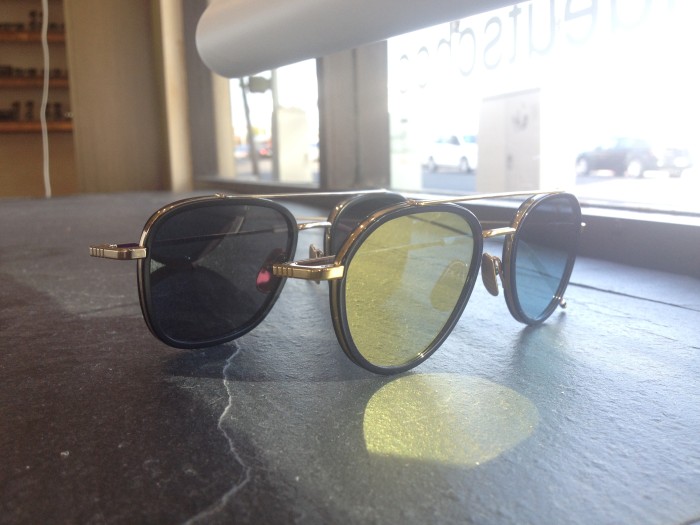 A sunglass on steroids, these up- and over-scale aviators are a kickass contribution to the pilot eyewear legacy.  Nuanced adjustments to proportion make these gold-on-gold bad boys feel larger than life. 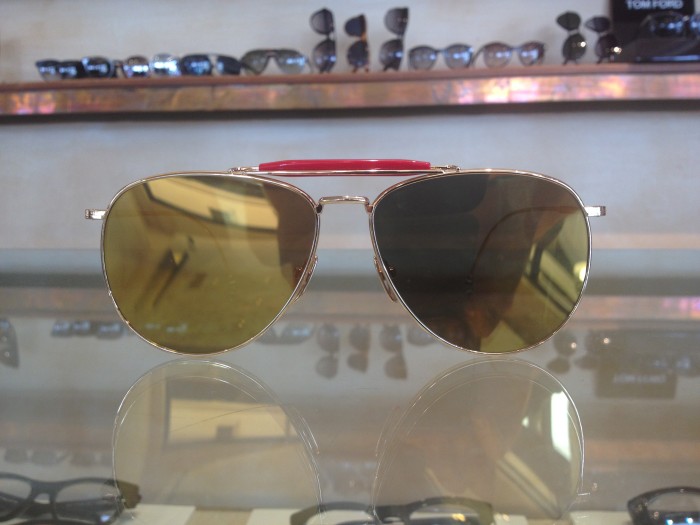 Originally designed for the runway, these Thom Browne aviators were produced in very limited run. 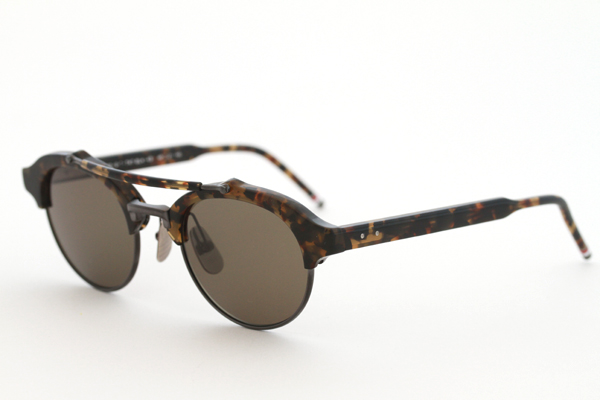 Thom Browne continues to impress with their impeccable quality and attention to detail. We recently got some new styles in at our Sunset shop including this TB 700 with an extraordinary double-bar bridge.

The double bridge is not uncommon in a sunglass, but in an optical frame, it’s unexpected… 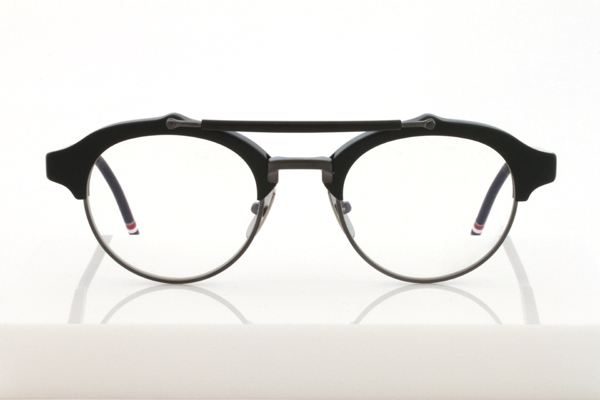 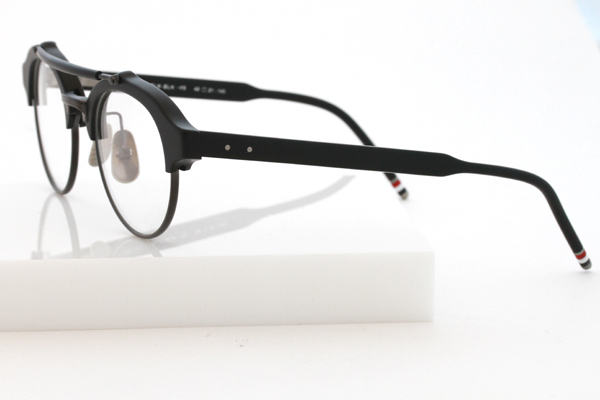 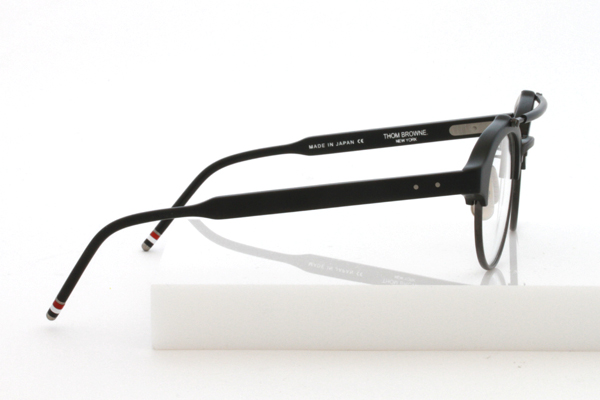 Black and shiny gold are making a strong showing this season, and this instant classic from Browne, available in both optical and sun, is stunning. 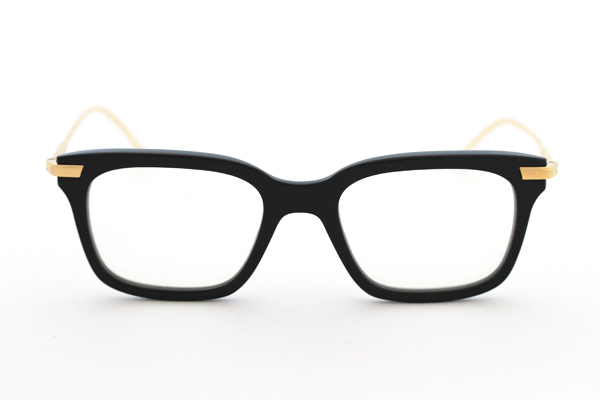 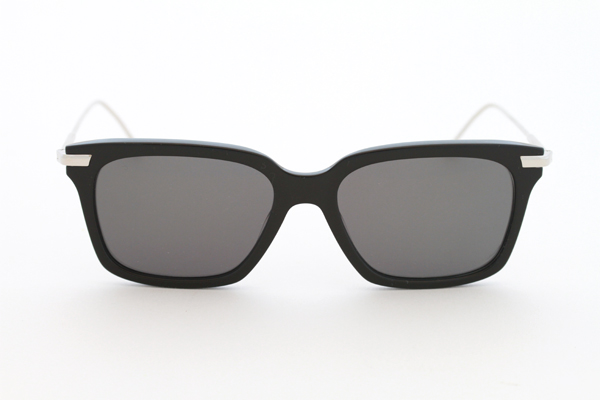 A few other styles that caught our eye:

New York Couturier Thom Browne recently launched his eyewear division, bringing to sunglasses and opticals the same high-touch sense of imagination that made his menswear line so well respected.

Browne explodes onto the market with this frame, which we think has already achieved icon status, right out of the box . The titanium frame derives inspiration from retro racing goggles, but instead of the traditional leather side shields, Thom Browne uses a fine metal mesh, completely thought-out with hinge and groove for when the glasses are folded. 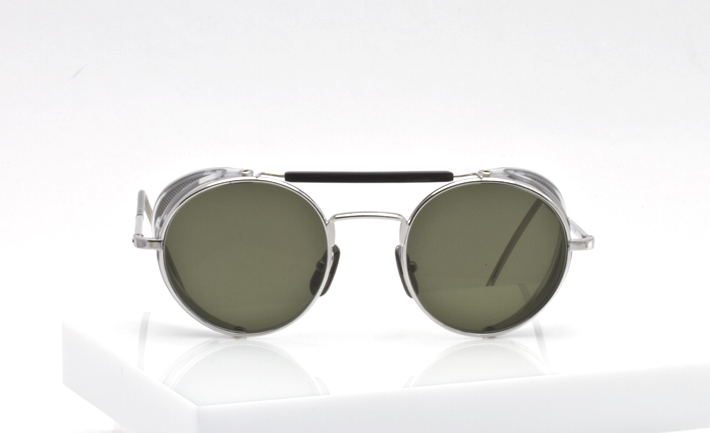 Like the racing googles, Browne’s version employs cable temples, but caps them with a signature red, white and blue tip. 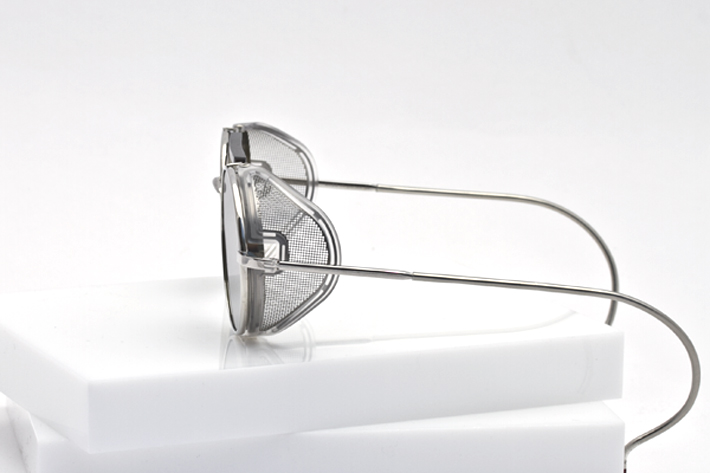 Thom Browne eyewear is all about clean lines, meticulous detailing (and lack of detailing!) and impeccable craftsmanship. Colors are straightforward and simple (think black with gold) or modern and uncombined (like matte grey). Designs are inspired by the the past but look to the future. They are handmade in Japan by master craftsmen. Take a peek at some of the other stand-out looks from the collection, below.

We’re proud that Dan Deutsch Optical Outlook in West Hollywood shop is one of the few places you can pick up a pair.