If you’re looking for shades in L.A. -and who isn’t?- Dan Deutsch is the man to see.

If you’re looking for shades in L.A.- and who isn’t?- Dan Deutsch is the man to see. Vogue’s Robert Sullivan talks to the glasses guru. 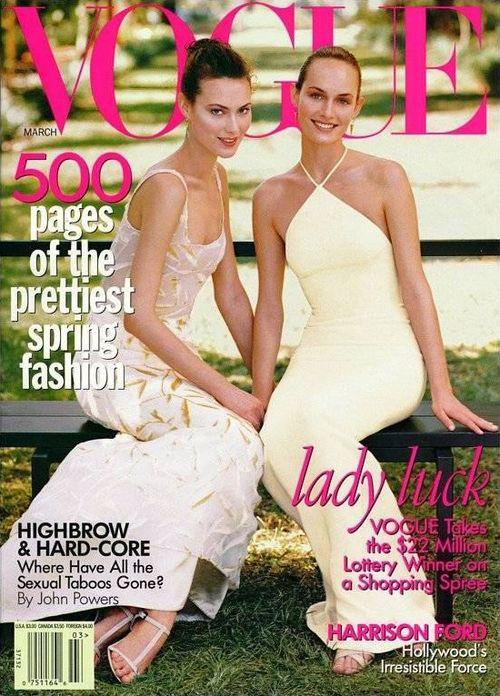 There is no flashing light on his car, no siren, no police escort, but the Jeep Grand Cherokee of Dan Deutsch, optical stylist, has the feel of an emergency vehicle as it takes a turn hard in Beverly Hills. In back of the Jeep, in the very spot where other Angelenos keep things like spare tires or emergency flares, there are several dozen pairs of extremely fashionable eyewear, each in a silk-lined compartment of a large tray. Deutsch has just dropped off a pair of frames that Steve Martin needs, stat; he has just gotten off the phone with Cher; and, at his store in Brentwood, he has just wrapped up a consultation with actress Joanna Kerns, who needed help finding the right pair for an ABC movie-of-the-week. Kerns plays a wealthy woman in Miami who hires someone to shoot her son in-law. For such a part, Deutsch has suggested a pair of dark Paul Smith wraparounds. After consulting with wardrobe and mulling over a few other pairs (including a zebra-striped, oval-eyed wraparound by Alain Mikli), Kerns took Deutsch’s advice, which resulted in her having a kind of Ivana-gone-mad look. “I do all my movies with Dan,” she said. On his way out the door to his next eyewear emergency, Deutsch down played the operation, like a humble surgeon wrapping up a heart transplant. “In reality,” he said quietly as he ran to his car with a few dozen frames, “more than one pair would have worked.”

Aside from being the fIlm and television capital of America, Los Angeles is also the nation’s capital of eyewear-designers like Oliver Peoples, Bada, and L.A. Eyeworks have headquarters there- and from that latter capitaldom there has been a slow shift in thinking about what we wear over our eyes. Where once sunglasses were fashion accessories, they are now becoming less accessory and more fashion. According to 20/20, the leading eyewear-industry magazine, U.S. retail sales of eyewear have risen from $9.4 billion in 1987 to $14.6 billion in 1996. The shift is precipitated in part by the number of fashion designers making frames. Calvin Klein, Versace, and Armani are the three biggest. Philippe Starck and Isaac Mizrahi have undertaken smaller ventures. On the sportswear side, even Nike began selling sunglasses last year. And in New York, boutiques like Robert Marc Opticians continue to flourish despite the Sunglass Hut-ification of the country. To people in L.A. who spend as much money trimming their bodies as they do tailoring their clothes, who dress casual as if casual were formal, face fashion is the obvious next step in pursuit of the perfect image.

Speaking from behind the wheel of his car, Deutsch summed all this up as follows: “Slowly but surely America is getting it. You have a woman who spent as much as she can on the clothes, on the makeup, and on, for example, the lingerie. She even got an eyelid job and maybe some work on her nose and her boobs, but then she walks into her dinner party or whatever with the same pair of sunglasses he had on when she went to the grocery store. It just doesn’t make sense.”

I spent some time one day recently with Deutsch, who refers to himself as Dan and to glasses as “eyewear.” He is one of the several opticians who have moved into the role of optical stylist to laypeople and to people in movies on TV. On the day he picked me up in his car, the frames he had on, though not holding sunglass, were designed by Bada, and they were a lot like him in that they were not too large; angular, assertive yet quiet; they made him look like a hip rocket scientist. He complemented his eyewear with a double-breasted blue sports coat, open-collar oxford shirt, and faded jeans.

He told me that he began in the frame business when he was sixteen, six years after his family moved to L.A. from Israel, and got a part-time job at an optical store at a time when only movie stars wore sunglasses at night. Today, his list of clients sounds like the place settings for the Academy Awards: He has made frames for Geena Davis, Meryl Streep, Jodie Foster, Jennifer Aniston, and Ellen DeGeneres, and for musicians like the late Tupac Shakur.

In L.A., along with trimming your body and tailoring your clothes, face fashion is an obvious step in pursuing the perfect image.

At any given moment, Deutsch has on hand close to 10,000 frames, and he keeps a thousand or so more at home, where his collection of antique frames grows each weekend as he trolls garage and estate sales around California. He keeps so many frames because he is the kind of eyewear stylist who believes each face has a right and a wrong kind of eyewear style. “If somebody has got a round face, let’s say, then ¥ou want a frame that is square or rectangular,” he says. ” If someone has a kind of low bridge, then you want to use a single-bridge frame. Then, if somebody has got a big nose, you often want something that fits lower on the face; basically you can make the nose look smaller- of course the lens can never touch the skin, because then it can get involved with the makeup and it can be irritating.” 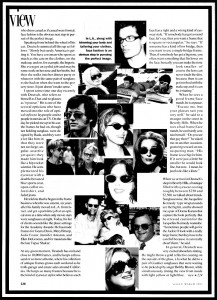 When he sees a good frame / face match, he is at peace. “Excuse me, but your glasses suit you very well,” he said to a stranger on the street in Beverly Hills. When he sees a bad frame / face match, he can barely contain himself. “Do you see that guy there?” he asked me on another occasion, gesturing toward an unsuspecting man. “His frame is too big for him. If it were just a little bit smaller he would look fine, but now- I mean, he just looks like a klutz.”

When we arrived at Deutsch’s shop in Beverly Hills, a boutique filled with eyewear costing roughly between $250 and $2,500, we talked about trends. Sunglasseswise, the Jacqueline Kennedy- type wraparounds are the big hit, and he showed me a pair of Donna Karans that capture the look perfectly. But he stressed caution for the Jacqueline Kennedy wannabe.”Sometimes people will go for the Jackie O look with a really large frame, but they have to be careful because it can really dwarf them,” he said.

In general , Deutsch was very excited about lens tinting. He might throw a gold reflective coating on the outside of the glass, a la what he did to a pair of Gaultier sunglasses that were waiting to be picked up by singer Bobby Brown, while simultaneously tinting the view from inside with light yellow or light blue. For his East Coast patrons, he recommends tinting sunglasses brown, which makes a gray day bright. “It can set your mood,” he said. “Tinting is something that is generally overlooked by women. They don’t appreciate the value of it.”

The overall trend in nonsunglass eyewear is toward slightly bigger glasses- not toward aviator style frames, to be sure, but toward glasses that are slightly larger than the John Lennon-size lenses that have characterized the retro look of the past five years. As an example, Deutsch showed me several frames by Oliver Peoples, which were all made in Japan and patterned after glasses made in the 1920s.

Deutsch sprinted over to a pair of Frederic Beausoleil glasses to show that the frames of the glasses themselves are becoming technologically more sophisticated as they blend different types of colorful plastics, called laminates: This particular Beausoleil frame was a brown tortoiseshell on the outside and a creamy green inside. “Laminates are very big,” Deutsch said. While describing patterns, he showed me a leopard-skin design on frames by LaFont, a French designer, and an angular red-and blue-patterned design by Conquistador, made in West Germany. But Deutsch lamented that in general there is still resistance to the kind of colorful frames he sees on his frame-scouting trips to Europe especially Scandinavia.

Soon we left the store and went on a house call, this one at the home of Leigh Taylor Young, the actress last seen starring as the sexy mayor in Picket Fences. As we rode up the elevator of her building, Deutsch said, “We have to keep in mind that this is a crucial moment for her because it is an investment and it is an image-forming situation.”

Taylor-Young welcomed us into her home. She was looking for fashionable workaday glasses and sampling sunglasses. “If I’m going to wear glasses, given my profession, then I need to know that every time I put them on my image is enhanced,” she said. “I would agree that glasses are a form of jewelry. I always say if it’s going on my face, it better look good.”

In describing Deutsch’s work, she spoke of the glasses she wore to the Emmys two years ago, when Picket Fences was nominated for several awards. “When I went to the Emmys I wore a very nice pair of light sunglasses, and they were perfect because when you’re at the Emmys you’re in black tie but you arrive in the afternoon and the sun is out.”

Deutsch interrupted. “Excuse me, but do you see?” he asked. “She’s remembering the occasion that she wore the glasses. It’s very interesting that she has it down to a thought process. Not everyone does.”

Deutsch sat down with the actress on her long living-room couch, a mirror before them and Taylor Young’s cat, Lucky, looking on. “Let’s see how these look,” he said. He started things out with a pair of dazzling Lagerfeld wraparounds.

“Oh, now, these are great glasses,” she said. But she said they weren’t practical enough. “I have a tendency to do a kind of Japanese look,” she explained. “I have these kind of black outfits for just running around, so I’m looking for something with that kind of monochromatic look.”

Deutsch put on her a pair of three-piece Kazuo Kawasaki titanium frames. He brought the frames slowly to her face; his arms suddenly and dramatically steadied just before he arrived at the bridge of her nose.

“I think the lenses are a little too small, aren’t they?” Taylor-Young asked.

“Actually, they are not,” Deutsch said.

She reluctantly passed on a beautiful antique wraparound pair studded with rhinestones, and then Deutsch offered her a copper-finished frame accented with green plastic piping, the lenses of which were oval with a hint of cat’s eye. The design, Kata; the cost, $329. Taylor-Young lit up. “As an individual, I’m very resonant with these,” she said. “They feel like they would be a part of me.” She wrote out a check.

Taylor-Young and Deutsch talked-for a while, then we said goodbye. Deutsch was very satisfied. On the elevator down to his Jeep, he said, “Actually, I had more that I wanted to show her, but when I saw the Katas on her, I knew that was it. There wasn’t any reason to show her any more. They were the ones.”